In the summer of 2010 the now retired General Stanley A. McChrystal was Commander of the U.S. Forces in Afghanistan. One day, during an important briefing in Kabul, he was shown the following PowerPoint slide: 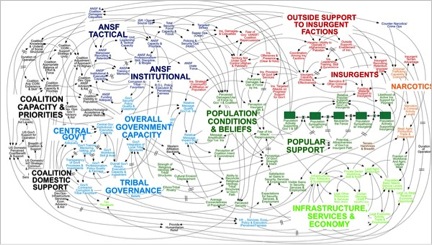 It was meant to represent the most current military strategy. Upon seeing the slide General McChrystal interrupted the briefing and said: “When we understand that slide, we’ll have won the war.” The room erupted in laughter.

This is a noteworthy example of what happens when leaders rely too heavily on charts and graphs to communicate their message to their bosses.

After the laughter died down General McChrystal put aside the slide deck and then wanted to know only two things:

1. What has changed since the last time we discussed the situation?

2. What do you recommend we do about it?

Being able to answer those two questions requires the ability to present a coherent and persuasive narrative. In other words, it requires a story.

Unfortunately, not everyone is a spontaneous raconteur. I know because I’ve been hired to teach the art and science of storytelling to thousands of people over the last fifteen years and what I’ve learned during this time is that certain types of stories are more compelling than others.

In fact, I’ve concluded that there are six basic narratives that every should spend time crafting and be ready to tell with very little notice. Working on the story you will eventually need is a strategic investment of time.

These six stories help manage change, implement strategy and increase engagement. I’ll take them one at a time.

My first boss used to say that the only person who likes a change is a wet baby. Considering that at the time he’d never even heard of a thing called email, it’s safe to say that change is an ongoing part of business.

The Change Is Growth story is the narrative that answers the questions people always have on their mind during times of complexity and transformation:

This type of story helps convince people that change is not only inevitable, but also essential to advancement.

Sometimes before you can tell a Change Is Growth story you have to make the case for change. These are the moments when you need to wave the red flag and say…

Stop what you are doing. We should be doing this other thing instead. If we don’t, we will be in big trouble. Remember what happened to Mercury? Blockbuster, A&P? Loehmanns?

The Watch Out! story is a cautionary tale.

According to the Pew Research Center 10,000 baby boomers will be retiring every single day for the next 17 years; that’s 170 million people. Additionally, the Social Security Administration has reported that almost 50% of those people are leaders in some capacity. This mass exodus of managers and supervisors is causing the largest leadership gap America has ever seen.

Organizations are deeply concerned about this “brain drain”—and about filling their leadership pipelines.

One way to keep intellectual capital in an organization is to get very good at sharing knowledge. That’s where the Pass It On story comes in.

This story imparts history and context for current decision-making. It also helps acculturate new employees, it can quickly teach health and safety policies, and most importantly, it offers wisdom from one generation of leaders to the next.

A core competency for a leader is the ability to dream, to set vision and to create strategy. People and communities can achieve great things when they understand what success looks like, which is why being able to paint a vivid picture of a successful future is perhaps the most important story in a leader’s library.

In 1977 when Bill Gates first said that he wanted his company to put a computer on every desk in every home folks thought he was crazy. What would the average person do with a computer? Computers were for hobbyists. But his vision became a reality, in great part, because he articulated his story clearly, consistently, and with passion.

The Story Of Us

Another significant job for a leader is to get the organization to embrace who they are—and who they are capable of becoming. What holds everybody together? What are the values of the company, team, or organization? Why should people want to be part of it?

The Story Of Us creates a mindset where people want to participate in their organization. It taps into the basic human need that we all have to belong, to be part of something bigger than ourselves.

Dofasco has a great slogan: “Our product is steel, our strength is people.”  But until the CEO, Jurgen Schachler, and his colleagues bring it to life with real examples and stories, it’s remains just that—a slogan.

And finally, once a leader brings to life the values of their company, or team, it’s time to share their own values. When people understand who their leader is, and what that leader stands for, they are more inclined to believe in and implement ideas and strategy.

The late Steve Jobs chose this type of story for his 2005 commencement address at Stanford. Jobs had been living with pancreatic cancer for two years. He began his speech by saying:

I am honored to be with you today at your commencement from one of the finest universities in the world. I never graduated from college. Truth be told, this is the closest I’ve ever gotten to a college graduation!

He then went on to say that he was going to tell three stories from his life:

He told the audience about the day he received the news that he had a tumor on his pancreas:

…my doctor told me to go home and “get my affairs in order,” which is doctor’s code for prepare to die.

He told them about having surgery and recovering well. And then he told the graduating class of Stanford:

Your time is limited; so don’t waste it living someone else’s life.

His message, the essence of who he was, is woven into every word of his speech. Many leaders agree that the My Core Values story is an important one to be able to tell. Warren Buffet, chairman and CEO of Berkshire Hathaway, once said to Politcio:

…people have to understand what you’re about. They may not always fully understand where you are going, but they have to believe in you.

Try a story instead of a slide

The next time you are scheduled to run a town hall meeting, get buy-in to a new idea, or simply give a status update I suggest holding off on creating another fancy chart or a graph to insert into your PowerPoint. Instead, for greater impact, try crafting one of the Six Strategic Stories to communicate your message.

As General McChrystal indicated, some ideas are just not bullet-izable.