Here’s a question for you, which US city increases its population by 20% once a year for an entire week? If you knew that the answer is San Francisco, then you probably also know about Dreamforce, the annual technology conference hosted by Salesforce.com since 2003.

I was lucky enough to have been invited to speak at this year’s conference in partnership with sponsor American Express. They hosted me for a session designed to inform attendees on how to get seen and be heard at work. After my session, I got to meet eight conference delegates for mini coaching sessions at the their onsite expo booth. 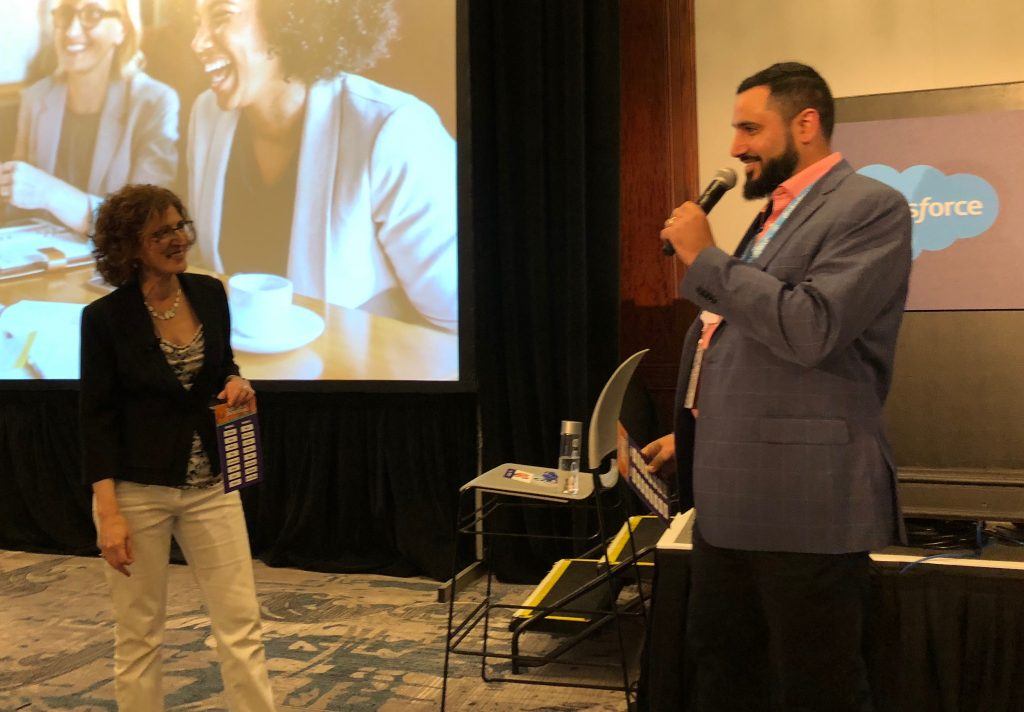 It was fascinating to hear the range of questions and issues they face. Here’s a small sample from three of my conversations

I’m naturally a little bit reserved and have a hard time speaking up in groups. How do I get my voice heard more during meetings?

Over the years many executives have told me that they are very comfortable during one-on-one interactions, but when four or more people are in the room, they don’t know what to say. I’ve encountered both C-suite execs that are challenged with this, as well as more junior folks.

One thing that holds people back from contributing is the belief that the only reason to speak up during a meeting is to say something new that hasn’t already been said. This view holds that a meeting is only about WHAT is being said, not HOW it’s being discussed.

I coach my clients to understand that they can have a positive impact on the meeting’s flow, and their own brand, by using the following techniques:

Summarize back to the group something someone else has said. The result of this method is that it reinforces the key message you think is important in the meeting.

It also helps everyone remember what’s being discussed. Research shows that it takes a minimum of three and as many as eight times to hear a message before it sticks. You can be the reinforcer. You help others remember what is important.

Compliment something someone else just said. The outcome of this technique is that it builds good relationships, especially with the individual that has spoken first.

At the same time it builds your brand. It lets the group know that you are someone who notices and acknowledges others.

“(Name of colleague), I hadn’t thought about it quite that way before, what a great perspective. Thanks for sharing that.”

Take the best thing that is going on in the discussion and build on it. Again, the goal of this is to reinforce a key message you think is important.

“I really like the idea of X. Perhaps we can expand it by adding Y too.”

Many people I’ve coached find that if they speak within the first five minutes of a meeting it’s easier to contribute later on. If they settle into listening mode too soon they find it difficult to get going.

With this in mind, challenge yourself to say something—anything—within the first few minutes of the meeting. This will break the ice and help you feel more comfortable when you DO actually have something to say!

It also reminds your colleagues that you’re there. If you attend too many meetings without contributing anything, you become invisible. And that’s not good for your personal brand at all.

If speaking up is an area of development for you, challenge yourself to try one of these approaches at your next meeting.

I hate networking. I never know how to answer the question: So, what do you do?

Lots of people have a hard time figuring out how to talk about themselves. They fear that what they do for a living will either be uninteresting—or too complicated—to explain to others.

What I’ve discovered is quite often they are the very ones making it sound uninteresting and complicated. I was once asked to coach a Private Banker on his elevator speech. Here’s what he had been saying:

I’m a Private Banker with 15 years of experience working with high net worth clients providing investment management services. My bank offers a full suite of wealth management, trust and estate services. We customize solutions to meet our customer’s needs.

While this may explain what he does, it doesn’t differentiate him from every other Private Banker out there. And it certainly doesn’t build a relationship—which is the entire point of networking.

I recommended he eliminate the business jargon and make his introduction more personal. Now his story sounds like this:

I’ve been a private banker for over 15 years, but when I was a kid I wanted to be Sherlock Holmes. Who knew that as a banker I’d get to think like a detective everyday. Clients come to me with their financial problems and I solve the mystery of where their money is going and how to invest it better for their future.

There are three elements to crafting a good networking introduction. I think of it as a formula:

Your Role + The problem you are helping your customers solve + something personal = the answer to: So what do you do?

Here’s some prompts for deciding what personal element you can include in your next networking speech:

I have a hard time with small talk. I never know what to say

This concern is thematically linked to the one above. People put pressure on themselves to be smart and pithy when they are meeting a stranger for the first time. This misses the point of small talk.

An easy way to start is to ask a question about the most obvious thing you have in common. In this case, it was the Dreamforce conference itself.

Other general questions I’ve had success with are:

It’s important to share your point of view and experiences too. Otherwise, the conversation will start to feel like an interrogation. One way to do that is to front load your question by disclosing something personal about yourself.

Note that I said personal, not private. One of the reasons some people have a hard time with small talk is that they confuse these two categories.

Personal things that I’m comfortable talking to strangers about are: I grew up in Michigan, I’m married, it was my brother’s idea that I could use my acting experience, and understanding of stage presence, to help people improve their executive presence.

Things that are too private might make a stranger feel uncomfortable upon a first meeting. No one wants to hear that you are suffering from diarrhea because of the spicy meal you ate last night, or that you’re thinking of divorcing your spouse.

I had a very interesting chat on day four of Dreamforce about serving on a jury. It’s a bit of a random topic to talk about at a tech conference, but we landed on it because I had just texted home. I shared with the woman I was talking with that my husband had just been dismissed from jury duty.

Turns out she sat on a jury years before. It was fascinating to hear the details of the case and what it was like in the jury room deciding if the defendant was guilty or not.

We exchanged business cards and as I said goodbye she said: I’d forgotten all about that case. Thank you. That was fun to remember.

Small talk can help someone remember something fun from his or her life. And that’s the point of it. It’s not about you having something brilliant to say, it’s about connecting with the person standing in right front of you, so they’ll want to reconnect with you again in the future.

I’m personally looking forward to reconnecting with Dreamforce in 2019. The content was valuable, the conversations were interesting, and San Francisco is pretty spectacular—even when it has 20% more people than usual.

If you didn’t get the chance to attend this year’s Dreamforce, or missed a particular session, American Express had recaps created from some of the most insightful sessions at the conference you can get the notes here.