Influencing or How to get a stranger to watch your luggage 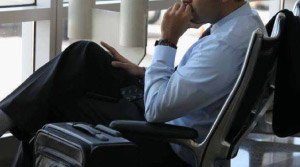 My work requires that I travel. A lot. I spend so much time in airports that I can recite the security announcement from memory:

“Do not leave your baggage unattended. Unattended baggage will be removed or destroyed by airport security… ”

A few days ago I was at LaGuardia waiting to board a flight to DC. I’d been sitting at the gate for a while. The security recording had played at least three times. Moments after the last broadcast ended I heard a young business traveler say to the middle-aged guy seated next to me: You seem like a nice guy, would you be willing to watch my stuff? I’ll be right back. The middle-aged guy looked up from his phone and said: Uhh… Yeah… Sure. I guess.

The Young Guy Took Off

As the young guy took off toward the food court, the businessman next to me caught my eye and shrugged an embarrassed shrug. Almost as if he were saying: I know. I’ve agreed to do something I probably shouldn’t have, but… what’s done is done.

The young guy was gone over half an hour and I watched as the middle-aged guy began to look worried. I myself started wondering:

Mostly I wondered: would I have agreed to watch a stranger’s stuff?

The young guy came back about forty minutes later with a burger and fries. He said: “Thanks so much man,” grabbed his bag and wheeled away.

The middle-aged guy looked at me sheepishly and a bit relieved. Nothing bad had happened. He’d been a nice guy and did a favor for someone.

I found the entire interaction fascinating. A businessman agreed to watch a total stranger’s belongings in a public place after he’d been cautioned several times over the loud speaker not to do this very thing.

Influence: Getting Other People To Do What You Want

Influence is the ability to affect the behavior of another person. It’s a killer skill to have. People that do it well have an advantage in life and in business. And best of all—it’s learnable.

Let’s look at how the younger man got the middle-aged man to agree to watch his luggage.

The principles in action here are revealed through strategic language choice. The young traveler didn’t approach a total stranger and say: I want to go and get a burger and fries. It’ll probably take me forty minutes. Can you watch my stuff while I’m gone?

It would be easy to say no to a request like this. Who would want to obligate themselves to a stranger for forty minutes while they go off to get something to eat? But at work we often position our requests as transactions. Here’s what I want. Here’s how long it will take. Can you do it. What our Influencer actually said was: You seem to be a nice guy, would you be willing to watch my stuff? I’ll be right back.

The wording is important. He anchored his request around niceness and willingness. Not around time. Not around food. Not even around the actual facts of the request—that he would leave the businessman responsible for his belongings.

How Did He Do It? Constancy & Commitment

He was able to psychologically secure an invisible pledge from a man that didn’t know him by leveraging a principle called constancy.

Human beings have a deep need to see themselves as being stable in their behaviors and values. Additionally, once we make a decision about ourselves we experience internal pressure to behave constantly with that decision. If, for example, you see yourself as a ‘nice’ person, you will want to be nice consistently.

Consistent Individuals See Themselves As Trustworthy And Stable

With this principle in mind it makes sense to assume that the businessman thinks of himself as a nice guy. Most folks like to think of themselves as being nice or at least trustworthy.

Doing favors for others is a nice thing to do. Trustworthy people do favors. A nice favor would be to watch someone’s stuff so they don’t have to drag heavy gear around an airport while they are trying to order food.

Our young traveler triggered the businessman’s instinct to be constant in his behavior by anchoring his request around niceness and willingness. Once this instinct was triggered, it was likely the businessman would agree to watch the luggage. It was likely, because the principle of constancy was now at play in the interaction.

Uhh… Yeah… Sure. I guess: The Inner Dialogue Revealed

Let’s deconstruct the businessman’s response to the request. He stammered an answer that revealed several layers of agreement. First he said: Uhhh… This showed some hesitancy on his part. Almost as if he were asking himself the question: Am I a nice guy?

Then he said: Yeah… as if to answer his own question: Yeah, I’m a nice guy. After this he said: Sure. He seems to be confirming his own values. Am I willing to show others that I’m a nice guy? Sure.

Finally he said: I guess. This is his tentative agreement. I’m a nice guy who is willing to show others that I’m a nice guy. Nice guys do favors for others. I guess I’d be willing to watch another guy’s stuff.

When we’ve committed to a small thing—in this case the idea of being nice and then to being willing to watch luggage—we are more inclined to follow through. We are inclined to follow through because we like to think of ourselves as being constant with the view we have of ourselves. In addition, the researcher Stephanie Brown, co-author of a 2005 study published in the Journal of Research in Personality, says that the older we get, the more we value constancy.

The middle-aged businessman was influenced by the young traveler’s choice of words. The entire interaction confirms what I’ve been teaching about Influence for years. Strategic use of language drives success in influencing others.

How To Leverage Constancy

You may now be wondering how the lesson gleaned from the traveler might help you become a better Influencer yourself. A simple technique we can borrow from him, one that galvanizes the principle of constancy, is this phrase: Would you be willing….

Another wording that is equally as impactful is: Would you commit to thinking about…

A more sophisticated approach would be to activate someone’s value system first, and then ask if they’d be willing to help:

Using a simple principle, like constancy, is an easy way to start to become a better influencer. To learn more about the additional Influencing principles join me on: