In the spring of 5th grade I overheard my mother talking to her cousin about a distant family member who’d recently passed away. He’d apparently been sick for a very long time. No one in the family could believe he lasted as long as he did. My mother was convinced that he’d “held on until his daughter was able to get the hospital.”

I’d never heard of such a thing before. That someone could “hold on” was an enormous concept. I thought about it for days. 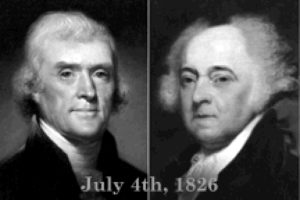 The next week at school we started a new history lesson. My teacher told us that for the first fifteen or twenty years after the Declaration of Independence was signed, people didn’t celebrate it much. It was too new. But that on July 4, 1826 an extraordinary thing happened. On that day, both Thomas Jefferson and John Adams, the last surviving members of the original American revolutionaries, died – within 5 hours of each other. And, that it was only after this concurrence that our country began to commemorate the fourth of July.

I was absolutely convinced that these two leaders had “hung on”. I even wrote a paper about it:

…They hung on until the fourth of July as their final gift to the nation they helped create. They somehow knew that the country, still in its infancy, needed a unifying ritual.” (I was a pretty precocious kid.)

There is obviously no way to know.

But the idea that a leader COULD create an event so galvanizing that people would be moved to talk about it over and over and over again – is a bold idea.

I propose that one of a Leader’s core responsibilities is to create these types of unifying rituals.

Coincidentally, soon after my 5th grade history lesson, my father started working at John Hancock Life Insurance Company. Part of the company culture was that they were bold and that they ‘went first’. After all, John Hancock himself was the first person to sign the Declaration of Independence.

My Dad’s new boss was bold. He understood the power of a unifying ritual. At the annual fourth of July picnic the top sellers of the firm got to dunk him in a tank of ice water.

The stories about this annual dunking were legendary. They were among the first my Dad heard when he started working there. “…last year Alan Bell dunked him five times!” (Alan Bell became famous in the office–and around our house!) These stories created a strong feeling of team among the sales guys.

The dunking, and the stories about the dunking, also motivated everyone to seriously engage with customers and meet sales goals. My Dad’s new boss understood how to create a galvanizing event.

And so on this fourth of July I ask: as a Leader, what are the moments and rituals that you’ve created? Is there an environment at your organization where people can succeed? After they’ve succeeded, will they be celebrated?

Or, in your office, does everyone arrive 10 minutes late to meetings because the unifying ritual is that no leader has been brave enough to state the obvious:

At TD Canada Trust in Vancouver I know of one Branch Manager who was brave enough to name this problem. And to create an event that would change the culture.

In 2001, after the bombing at the World Trade Center, this Leader thought deeply about how she was using and experiencing her time; both at home and at work. She realized that she, and everyone who reported to her, was frazzled and stressed most of the time.

She was moved to host a breakfast and create a policy for her staff. In honor of living a calmer more meaningful life, she announced,

It’s important to note that I didn’t hear this story about the policy from the Branch Manager. I heard it from one of her Financial Advisors. He told me:

…it’s incredible that this simple change of how we use our calendars has changed the vibe at work. Everyone feels calmer now. And amazingly, we get more done. I didn’t think that would happen. I thought that by cutting 15 minutes from each meeting we’d fall behind. But she was so convincing about the idea when she told us, I decided to give it a go and I’m glad I did.”

The story was being told. Over and over and over. This brave Branch Manager created not only a new ritual, but the conditions for the ritual to be talked about by her staff.

During your time off this weekend give some thought as to what you can do when you get back to work to create purposeful rituals.

I hope that this fourth of July gives you time to reflect on the country, on your leadership, and on your family. Have a wonderful holiday weekend!