Walk your Talk: The Benefits of The Walking Meeting

When I was a kid the scariest place to be told to go was… the Principal’s office. The nasally voice of our school secretary would blast over the intercom and unaware, someone would be summoned:

Uh oh. Big Trouble. After the announcement, everyone in class would look down at their shoes and breathe a sigh of relief. It wasn’t their name that had been called.

The day it happened to me, I couldn’t fathom what I’d done wrong. I was certain I was going to be evicted from school never to see my friends again.

It turned out that my Mom had forgotten to sign a permission slip for a class trip, but I was shaken by the experience for a week.

I often tell this story to newly appointed managers as an illustration of the power of Power. Leaders often forget that no matter how approachable they are, the mere fact that they are ‘the boss’ can be intimidating to staff.

A coaching client of mine, the CEO of a billion dollar manufacturing company outside of Chicago, has found a very resourceful solution to this dilemma. She rarely has meetings in her office. In fact, she rarely has meetings in any office. She has taken to having important problem solving or brainstorming or information sharing conversations in the hallway.

Don’t just Talk the Talk and Walk the Walk. Do both—At the same time.

Everyday for an hour she invites someone to walk with her. On a nice day she’ll walk outside. In the winter she’ll walk up, down and around the corridors of the building.

“People are more comfortable telling me things if they don’t have to look at me. Plus, I get in about 6,000 steps. That’s good for my health and keeps my stress levels down. And frankly I think that people are more creative when they get out from behind their desks.”

Researchers at Stanford University recently measured the creativity of people who were sitting vs people who were walking. They found that on average we are 60% more creative when we move around than when we sit. 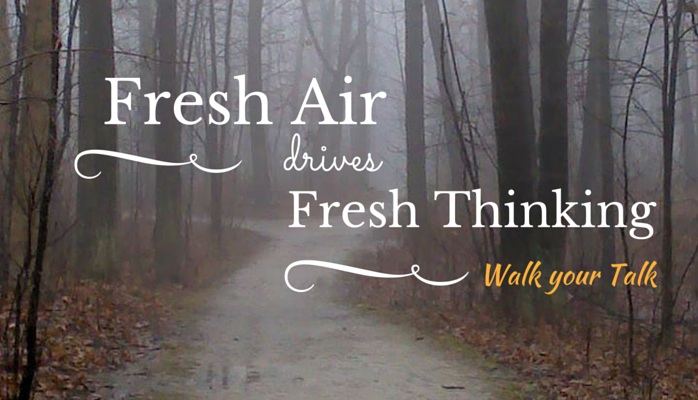 Another study by the University of Michigan found that fresh air can drive fresh thinking. Researchers split a group of volunteers into two groups. One group spent time outside and the other did not. The group that spent time in nature showed improvement in their ability to concentrate and solve problems more creatively.

In addition, the medical community has sounded the alarm about the dangers of sitting for too long. Studies show that on average Americans sit for about 9 hours a day, which is more than we sleep. This sedentary life style increases our risk for breast and colon cancers, diabetes and other chronic diseases.

For all of these reasons The Walking Meeting is the best and easiest to implement idea I’ve come across in a long time.

If you would benefit from improved health, increased engagement with your staff and better problem solving abilities than get up. Get up and out from behind the box of your desk. Step out of the box of your office and go for walk. I promise, you’ll be glad you did.