What’s up with Chicks and Science? 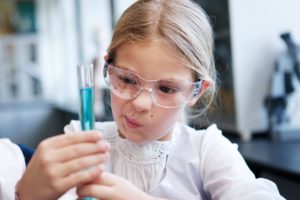 This sardonic question was posed by a reporter to a panel of scientists at the New York Academy of Sciences a few years ago. Courtesy of Upworthy, a video of the answer has been making to rounds of facebook, linkedin and twitter this week.

The question refers to comments made by former Treasury Secretary and Harvard University President Lawrence Summers, who had publically suggested that “genetic differences” might explain why fewer women are in the sciences than men.

The query created nervous laughter, followed by a long uncomfortable pause among the panelists before Neil deGrasse Tyson spoke. He received a rousing round of applause for his passionate, thought provoking and personal response.

I was moved and impressed by Mr. deGrasse Tyson’s reply. But that is not what struck me as I watched the video clip.

What struck me, what hit me like a thunderbolt, was that the scientist sitting next to Mr. deGrasse Tyson on the panel was a woman; a scientist names Ann Druyan, and she did not speak. On an issue directly related to her right to belong to the very scientific community where she had been invited to be a panelist, she hesitated. And in that hesitation – a man spoke on her behalf.

I see this hesitation all too often in my coaching practice. As a result, I’m often called to speak to groups of women on the topic of Speaking Up. Women, often very successful women, hesitate.

“…wait to be offered a salary increase, they wait to be offered a promotion. They wait to be assigned the task or team or job that they want. And this has a snowball effect. Even a small pay boost will mean bigger annual raises and possibly bigger bonuses and it will carry over to a new employer, who is almost certain to ask: What was your last salary?“

When women come to me for help the first few questions I ask are:

The answer to this last question is pivotal. The research shows that more often than not women attribute their accomplishments to luck rather than skill. Men don’t do that. Men don’t think:

How lucky. I was just sitting here minding my own business, being a good little boy and this promotion landed in my lap. Just like that.

Why else would she remain silent on an issue directly related to her livelihood, in a very public forum?

If you are a woman in a position of Leadership in your organization or community, get ready. Let’s all get ready to speak up and answer:

Get clear in your own mind about why you belong and be ready to share that perspective with the world at large, because our daughters are watching and if we hesitate, they will too.

Click here for more tips on Executive Presence for Women.