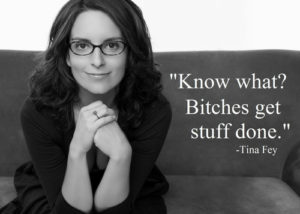 Not long ago I spoke to a group of high potential women in digital media about defining their personal leadership brand. During the Q&A one woman, a Vice President, said:

Look, I appreciate that many of my colleagues need to learn to “Lean In” and all that, but that’s not my issue. I’m not afraid to speak my mind. I never have been. My issue is that when I speak up I’m called a bitch.

A yes. The B-word. This is difficult terrain. On the one hand, in order to get ahead, many women do need to learn to speak up and show more confidence at work. On the other, there is the risk that showing up more assertively may be misinterpreted. What to do?

One thing that is important to understand about offensive language is that it is intended to put a person on the defensive and to make them back down. In the case of being called a bitch, the words are a signal. They say: “You are not behaving the way I think you should—and I don’t know what to do about it, so I will resort to name calling.”

It’s not about you­—it’s about the behavior

When someone calls you a bitch what he or she is really doing is giving you feedback—albeit in an inelegant way. They are labeling your behavior. Instead of feeling angry or ashamed about being called a dirty word, consider what you may have done to trigger such a negative response.

Is there some truth to it?

Peg Rowe from Tiara International, an executive coaching firm, recommends asking yourself this question: “What 10% of this feedback might be true?”

Have you been complaining or rude? Blaming others? Perhaps they don’t understand that you are really quite shy, but they misinterpret your quietness as silent judgment. Or maybe they are seeing your irritation with them?

My first real leadership position was at a start-up consultancy run by two women. About a year into the job one of the women asked to see me and told me to stop acting like a bitch. She said that I was being hostile during staff meetings.

I was stunned—and tempted to tell her exactly where I thought she should go.

A few days later, after the shock wore off, I realized it was true. I’d been frustrated for weeks about the direction the company was taking. I thought I had been “speaking up” during those meetings for the health of the company, but I now understood that my anger about the situation was obviously leaking out. I apologized for my behavior and started learning how to manage my own stress more effectively.

Learn to say No

Built-up stress is another cause of negative behavior. Many women I coach find themselves in the unproductive cycle of taking on too much, getting overwhelmed and then losing their cool in a ‘bitchy’ way.

I’ve been working with a Managing Director at a manufacturing company on this very issue. She found herself saying yes to every request made of her, and each time she became more and more angry with her boss until one day, she snapped.

As we were examining what happened I asked if she had spoken to him about her workload. She replied: He’s my boss, he should know how much is on my plate already!

The thing is, your boss is not a mind reader. If you are doing quality work of course he or she will challenge you with more.

One way to avoid being called a bitch is to avoid getting too stressed in the first place. Practice saying no. Share your thinking and situation with your boss and colleagues. Learn to communicate your needs early.

Pay careful attention to who provided the feedback. Is it coming from a man who uses labels like “asshole” or “jackass” for his male colleagues too? If so, it might just be this one person’s way of expressing himself. You can choose to engage with the individual about his language. Or you can choose to move on.

Another way to take the sting out of the word is to own it.

In the October 2015 issue of Cosmopolitan Magazine Gloria Steinem was quoted as saying: “The best thing I’ve ever thought of to say when somebody calls you a bitch is: thank you. I mean, it totally disarms them. They don’t know what to do.”

Saying thank you is a clever way to call out someone else’s bad behavior in a positive light.

This technique especially appealed to the VP in my audience. I followed up with her a few weeks later and she told me she has started saying: “Thank you. My Dad taught me to be direct and speak the truth.”

What I really like about this response is that it’s also psychologically strategic. She is sending the message that the behavior that is being labeled is something she learned from a man, her father. She continued: “I like turning something was meant to be mean into a compliment.”

She also shared with me that it’s true, her father had taught her to be honest and direct. It’s the part of her brand that she’s the most proud of. She decided to just own it. She knew she was doing good work and adding value to the organization.

Our conversation reminded me of what the comedian Tina Fey once famously said: “Know what? Bitches get stuff done.”