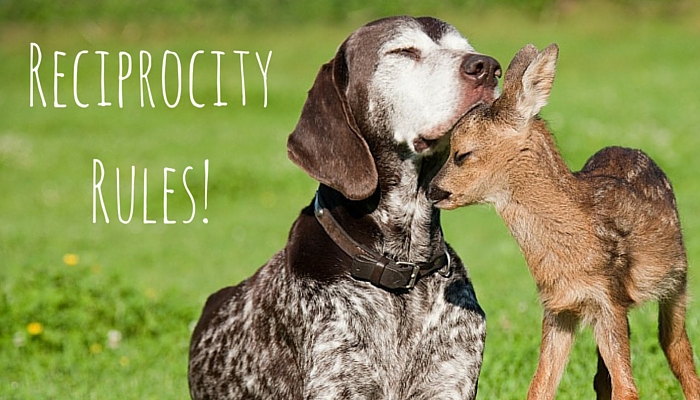 This year my husband and I received an adorable, yet mysterious Christmas card. It was signed by a woman neither one of us can remember ever meeting. “So”, my husband said as I placed the card on the bookshelf with all of the others, “Do you think we are subjects in a modern version of that experiment you wrote about?”

He was referring to a section of an article I’d published earlier in the year about the notion of reciprocity as an influencing technique.

Here’s the story: In 1974, Phillip Kunz, a sociologist at Brigham Young University received hundreds of beautiful Christmas cards. Some folks sent him pictures of their children sitting on Santa’s knee. Others mailed their favorite sugar cookie recipe. He got notes from Grandparents bragging about their grandchildren and a postcard signed with a paw print from the family dog.

It seems like Phillip is one popular guy, right? Except for this: he didn’t actually know any of the people.

Earlier that year, he’d done an experiment to test the power of social obligation.

He collected telephone directories from nearby cities and randomly selected 600 names. He then sent a handwritten note to everyone on the list, along with a photograph of himself with his family. Then, he waited. Come Christmas he received 200 holiday cards; from people that didn’t know him at all. Total strangers.

That is the pull and sway of reciprocation. As I wrote in the article, it is a powerful influencing tool. Phillip Kunz demonstrated that it is so powerful, even strangers will be influenced by it.

As 2016 approaches I encourage you to practice being more influential at work and get what you want by leveraging the invisible rule of reciprocity.

And now, if you’ll excuse me, I have a relationship to deepen and a holiday message to send. Our generous Christmas card writer will be expecting to hear from us.