Even Stars Get Stage Fright

My husband has discovered Pandora, an online streaming radio station. Being the curious sort, he wondered if he could use the app to build a stand-up comedy station instead of just a traditional music station and it turns out—you can. Every night for about 30 minutes before we go to bed we listen to the greats; Eddie Izzard, Alonzo Bodden and of course, Jerry Seinfeld.

Last night I found myself actually LOLing at one of Jerry Seinfeld’s early jokes:

According to most studies people’s number one fear is public speaking. Number 2 is death. Death is number 2. Does that sound right? This means to the average person if you go to a funeral you’re better off in the casket than doing fthe eulogy.

I love the way he is able to take a truism about life and turn it on its head. But this morning his truism stuck with me. Studies do show that people are afraid of public speaking. A big part of my coaching practice is helping people overcome this exact fear. 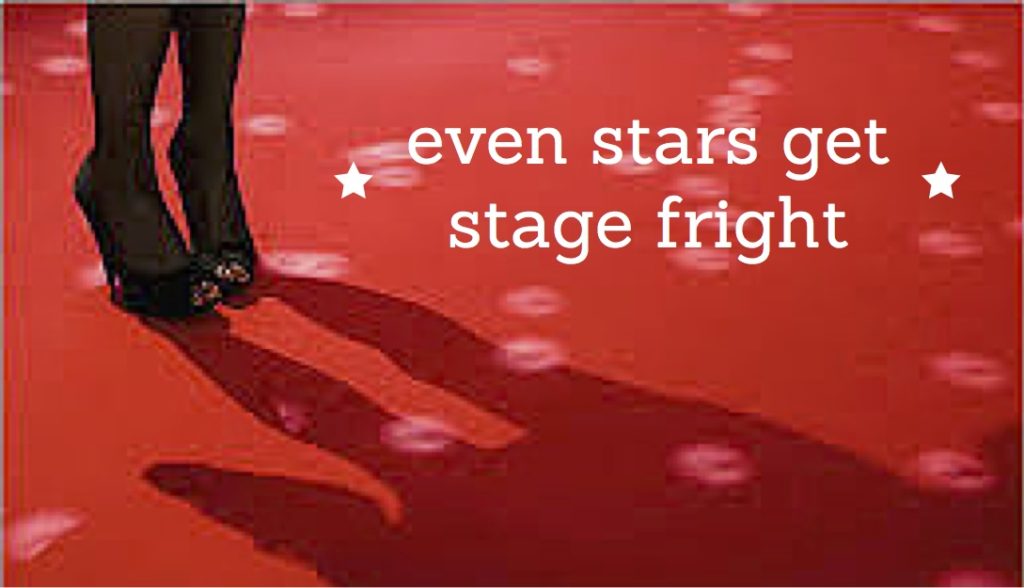 Many of my clients are comforted to learn that even Stars get stage fright.

Feel the Fear and DO IT anyway

One technique I’ve found very effective is to challenge people’s assumptions about the notion that successful presenters aren’t nervous.

In fact, when it comes to performing, all sorts of accomplished presenters—even celebrities, are more courageous than they are confident. And that is partly what makes them so successful.

Courage is the act of feeling the fear and doing the scary thing anyway. Even if it means, quite literally, being pushed onto the stage.

One of the greatest actors of the 20th century, Laurence Olivier, wasn’t struck with what he called the terrors until middle age. In his autobiography, Confessions of an Actor, he recounts using a vomit bucket backstage before many a performance. And then, needing his stage manager to shove him on after he’d unloaded himself.

In a 2002 CNN interview with Connie Chung the opera singer Andrea Bocelli confessed that he is regularly affected by stage fright: “I don’t want to use drugs or medicine,” he said. “The only way is to just go on stage.”

The Grammy Award winning singer/songwriter Carly Simon has had such a hard time with the condition that she has, at times, poked herself in the hand with safety pins in order to focus her mind on something else.

When the rock star Rod Stewart made his U.S. debut at New York’s Fillmore East Theater he admits to being so nervous that he sang his entire first song from behind a stack of speakers.

Which brings us back to Eddie Izzard

Even one of my nightly Pandora favorites, Eddie Izzard has struggled. Here’s what he recommends. Force yourself NOT to think about your nerves:

You just can’t think about it. My analogy for not thinking about it is car driving: when you get in a car, you never think – what if I kill a kid after two minutes? You just don’t even think about it. You just make that pact with yourself.”